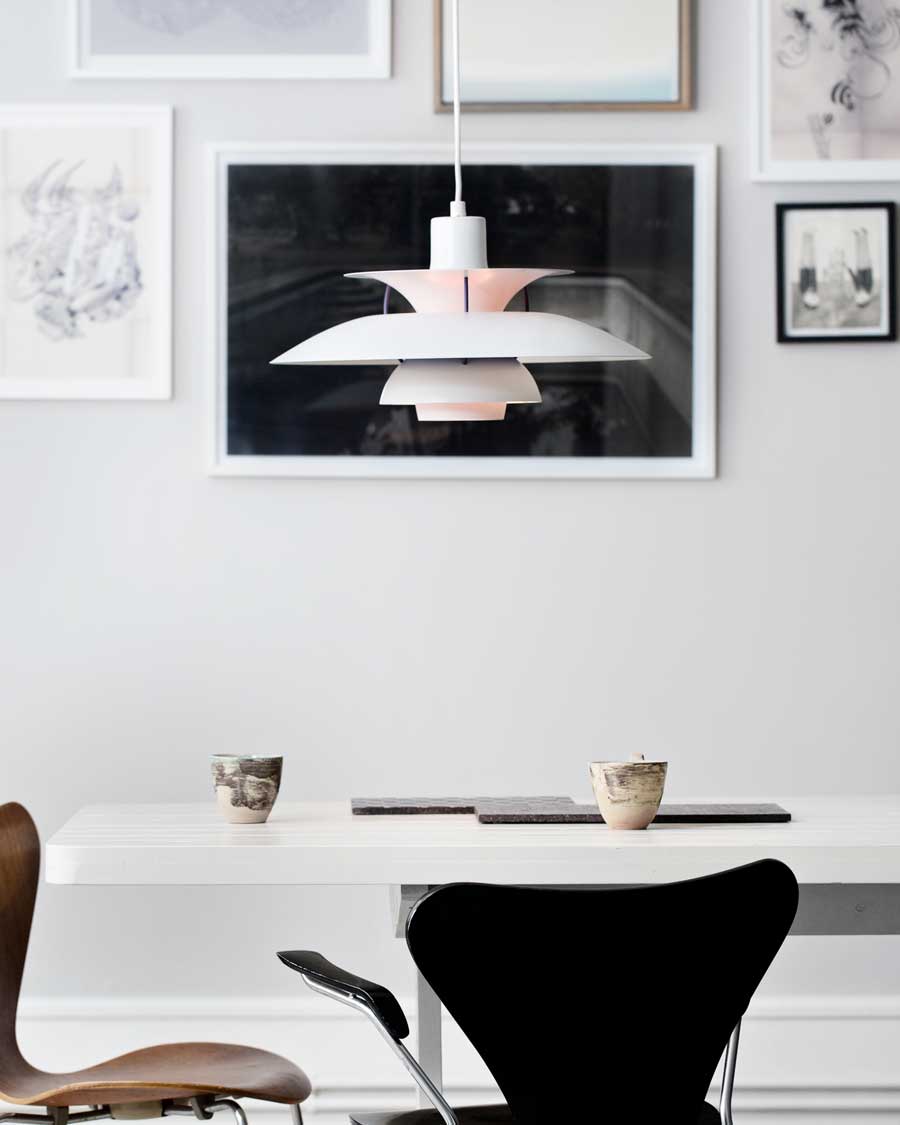 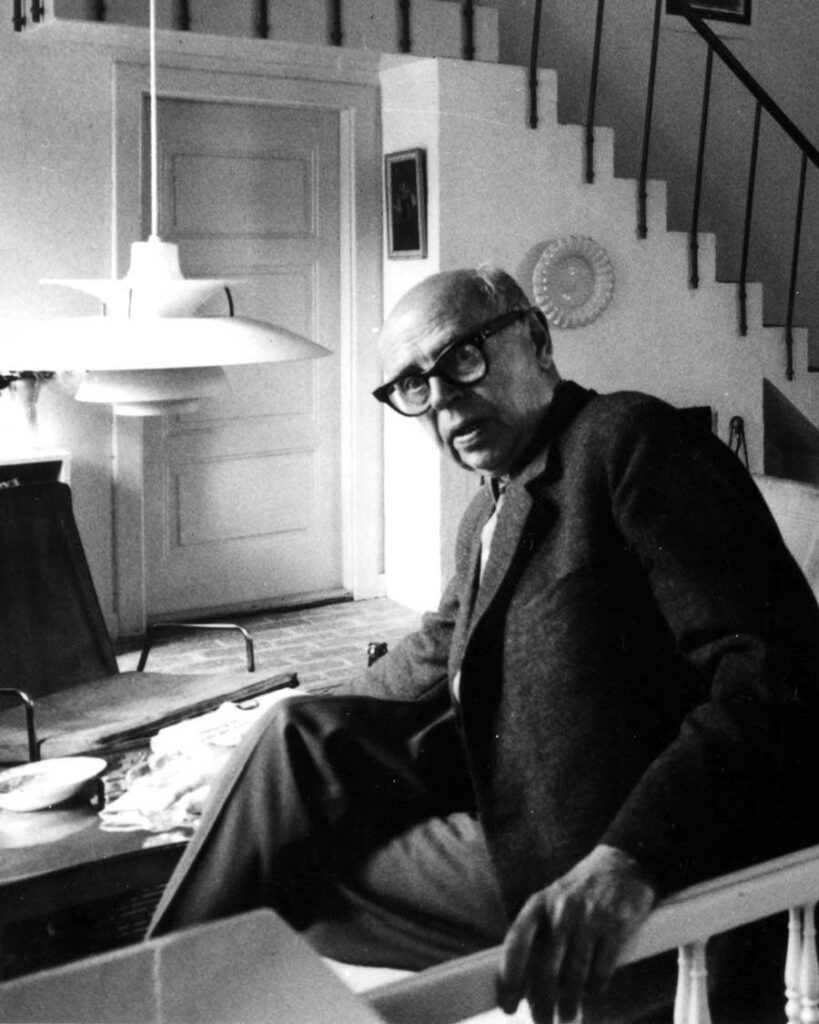 Poul Henningsen was born on September 9, 1894 in Ordrup, Denmark. He is the illegitimate child of the feminist writer Agnes Henningsen and the satirical author Carl Ewald.

Poul Henningsen was born on September 9, 1894 in Ordrup, Denmark. He is the illegitimate child of the feminist writer Agnes Henningsen and the satirical author Carl Ewald. Poul Henningsen had a happy childhood and learned masonry up to the age of 17. He then went to the Technical School of Frederiksberg until 1914 and continued his training at the Technical University of Copenhagen, without, however graduating. At the same time, he trained as a painter with the artist Johannes Larsen, who is best known for his depictions of Scandinavian nature. Thus, the young Henningsen's career path is atypical. In contrast to the avant-garde architects and artists who studied at the School of Fine Arts, Poul Henningsen was trained as a craftsman.

By 1919 he already had his own design studio and surrounded himself with architects Hans Hansen and Mogens Voltelen. At first, the Henningsen studio produced interior design pieces with a functionalist style and modern forms. From the mid-1920s onwards, the designer became particularly interested in luminaires and electric lighting, which he considered to be the most important technical innovation of the last century. With the precision of a scientist, he sought the light that could illuminate a large room without dazzling people. He thus imagined the "System PH", a suspension with three shades that act as reflectors. In 1925, Poul Henningsen presented the PH model at the International Exhibition of Modern Decorative and Industrial Arts and won the gold medal. Subsequently available as wall or floor lamps, in glass or metal, the PH lamps seduce by their elegance and modernity. The designer thus becomes a worldwide reference.

At the same time, Poul Henningsen enjoyed a certain literary success. Involved in the Danish intellectual milieu during the interwar period, Henningsen published in 1933 his most famous work, "Hva 'mae kulturen". He developed a radical critique of the cultural policy of the Social Democrats, which he considered unambitious, and warned against the latent Nazism and Stalinism in Danish intellectual circles. During the Second World War, Henningsen was censored and under surveillance. He decided to return to Sweden with his wife and the architect Arne Jacobsen. This decision saved his life: the terrorist faction of the Danish Nazi party was planning his assassination.

Upon his return to Denmark at the end of the war, Henningsen resumed his activities as a designer while remaining a critic of communism, which was then enjoying massive support. In 1963, PH became a member of the Danish Academy. The following year he was approached by the Myresjöhus company to design a model of a mass-produced holiday home. He successfully completed the project and received in return one of the houses free of charge. Diminished by Parkinson's disease, Poul Henningsen died in 1967 at the age of 72.

Poul Henningsen developed the PH 5 in 1958 in response to constant changes made to the shape and size of incandescent bulbs by bulb manufacturers, naming it after the size of the pendant’s main shade, which is 50 cm in diameter. When the lamp was introduced, he wrote, typically daringly, about how he had lost faith that the manufacturers of incandescent light bulbs would ever learn to consider common sense or have the consumer’s best interests at heart: “I have accepted fate, and with Louis Poulsen´s permission I have designed a PH fixture, which can be used with any kind of light source, Christmas lights and 100 W metal filament bulbs. Although a fluorescent tube would be too much to ask in the existing form!” Henningsen wanted to improve the colour reproduction characteristics of the light source in the PH 5. Small red and blue shades were therefore inserted to supplement the colour in the part of the spectrum where the eye is least sensitive – the red and blue areas – thereby subduing the light in the middle yellow-green region where the eye is most sensitive. At the time, no one knew that the PH 5 would become synonymous with the PH light, which remains 100% glare-free, irrespective of how the light is installed or which light source is used. The red and blue rings are however no longer necessary to achieve superior light quality, since today’s light sources reproduce daylight far better than in Henningsen’s time. Nonetheless, PH 5 continues to elevate even the most modern interiors in a range of colours today. In 2020, the PH 5 Monochrome series is introduced to emphasize this striking design for a more current look. The mat painted metal shades come in black, white, and in ultra blue for the bolder decorater.

More about this product 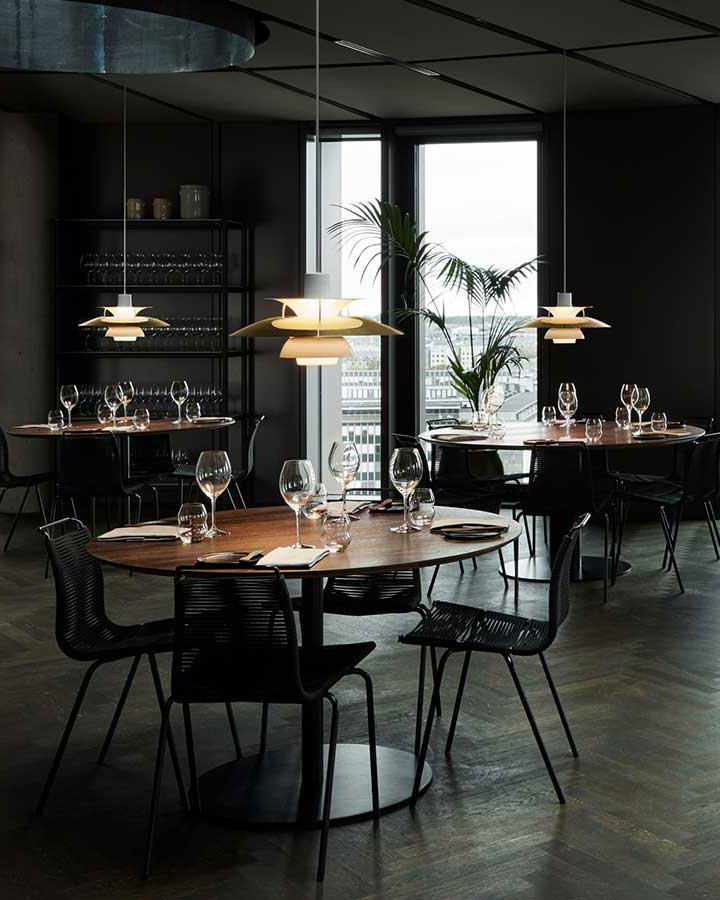 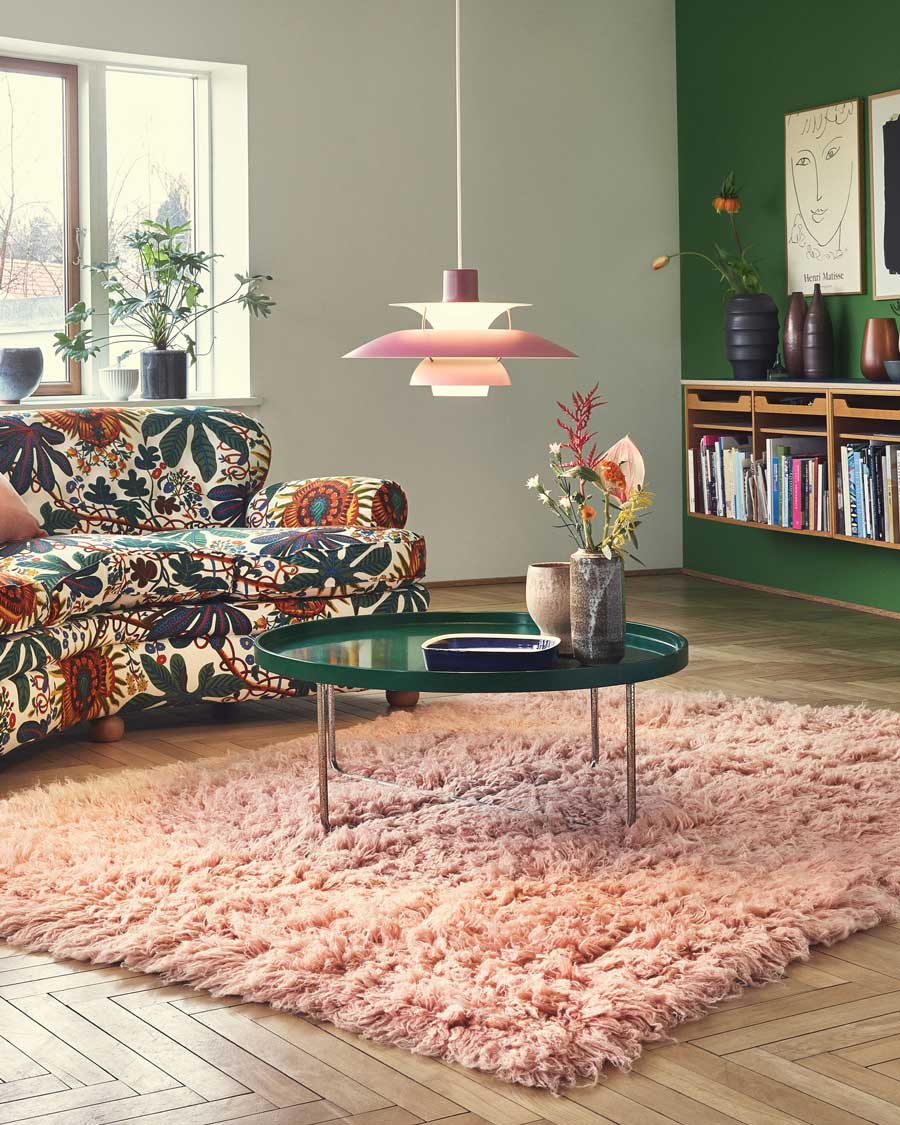 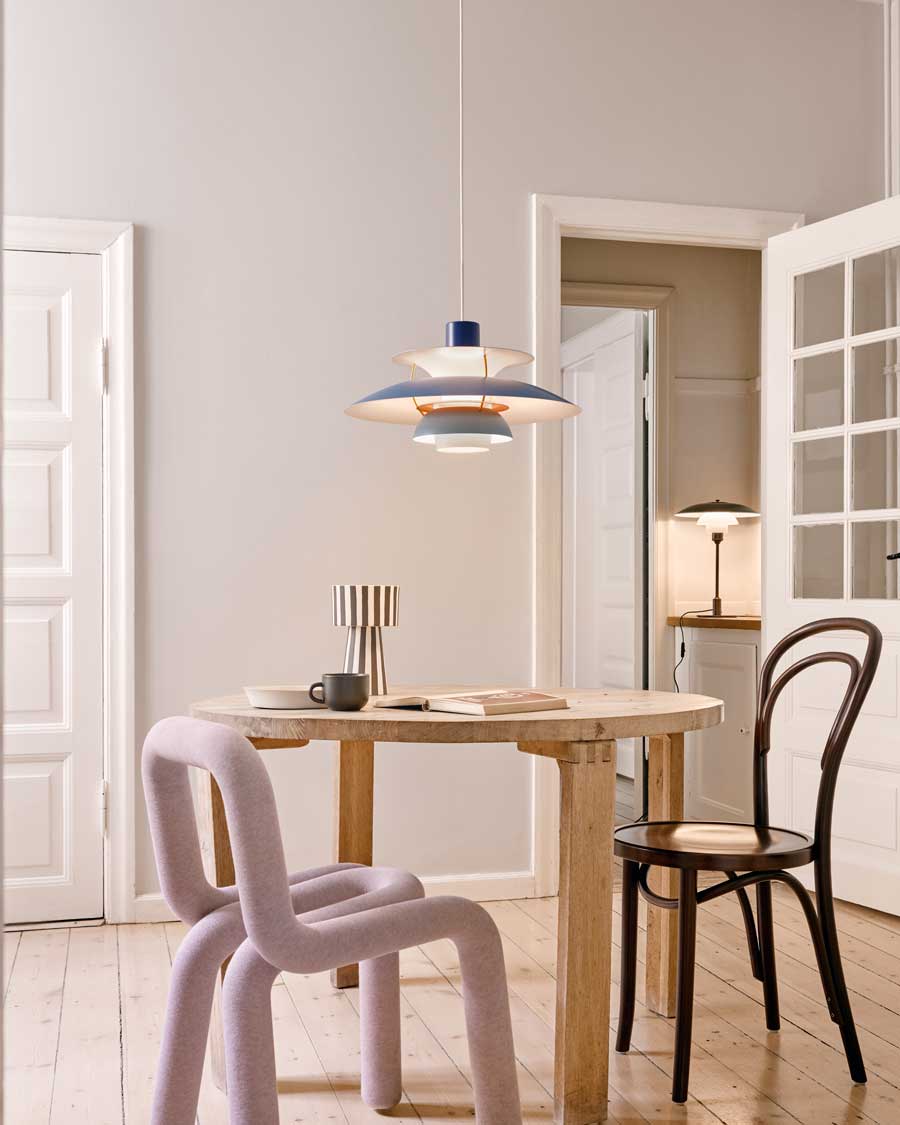 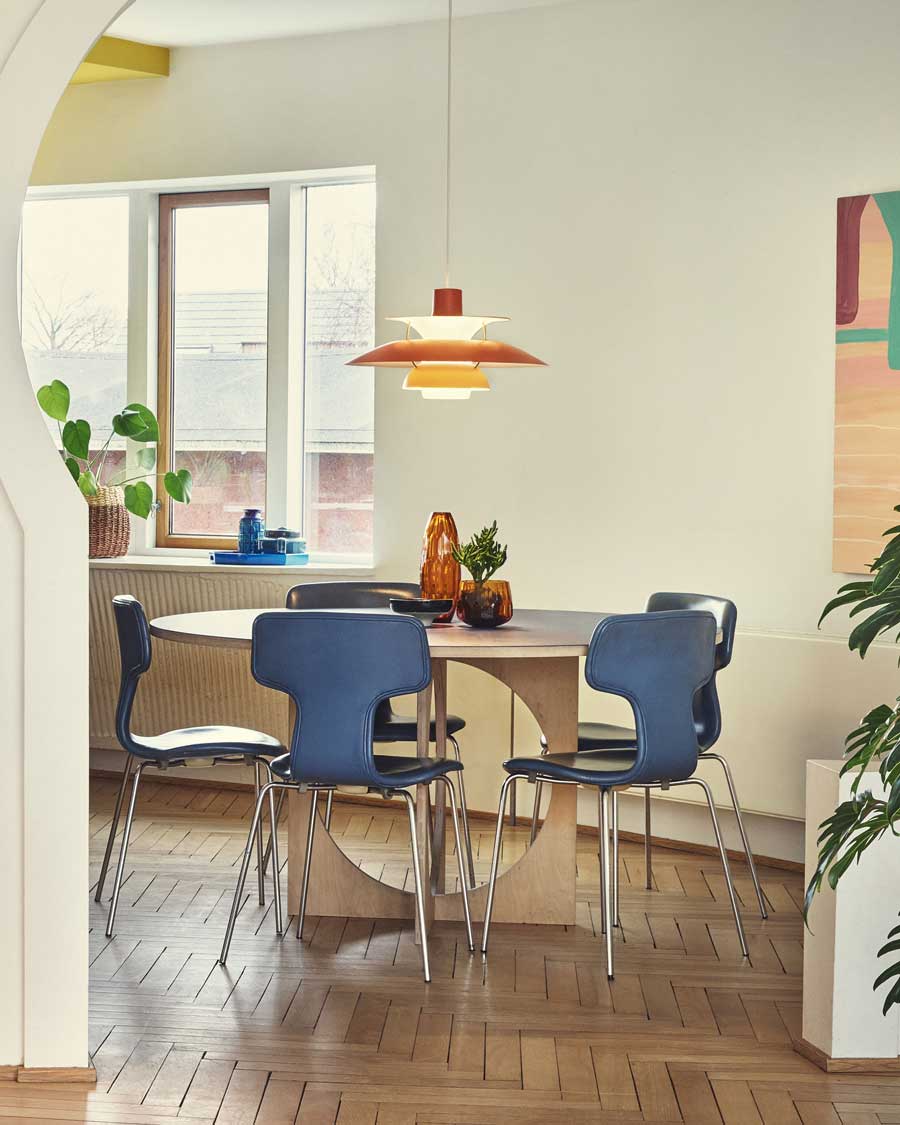 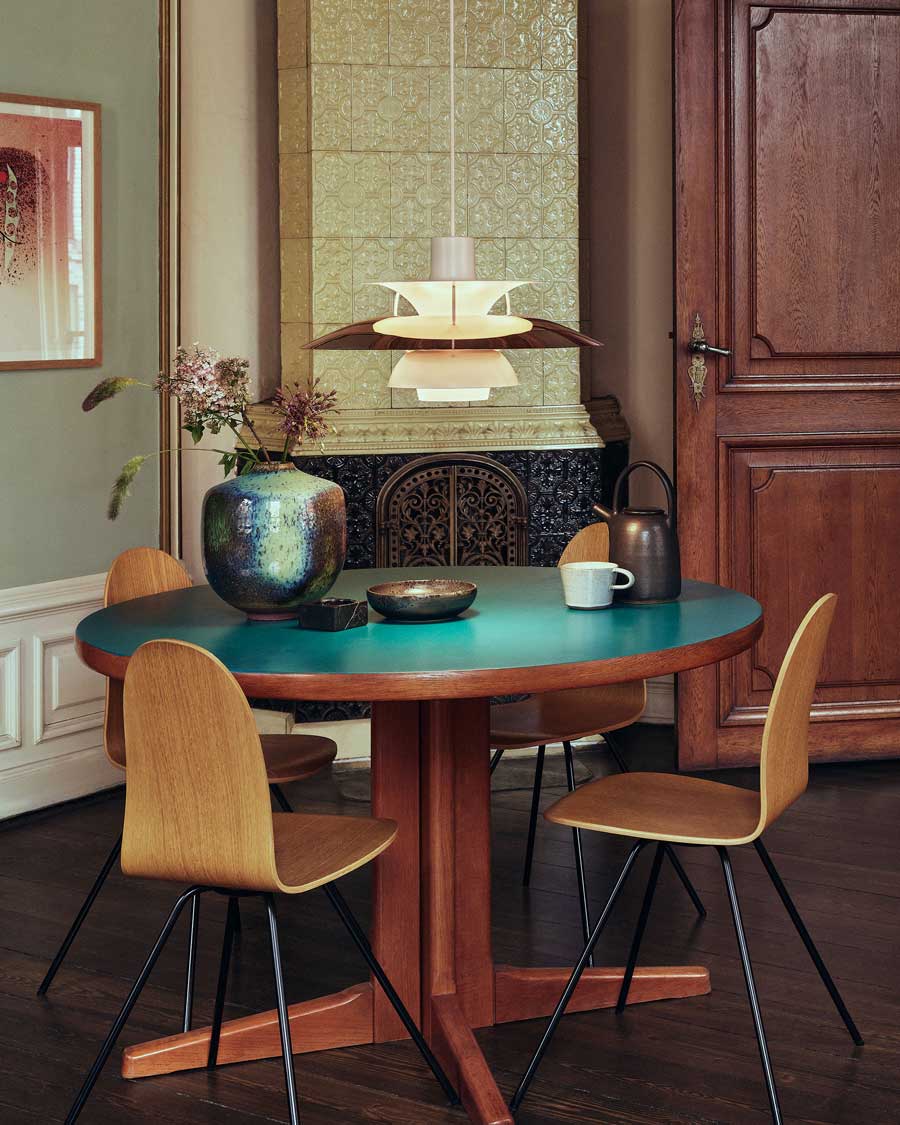